DRAG DROP
A Security administrator wants to implement strong security on the company smart phones and terminal
servers located in the data center. Drag and Drop the applicable controls to each asset type.
Instructions: Controls can be used multiple times and not all the placeholders need to be filled. When you have
completed the simulation, Please Choose Done to submit.
Select and Place: 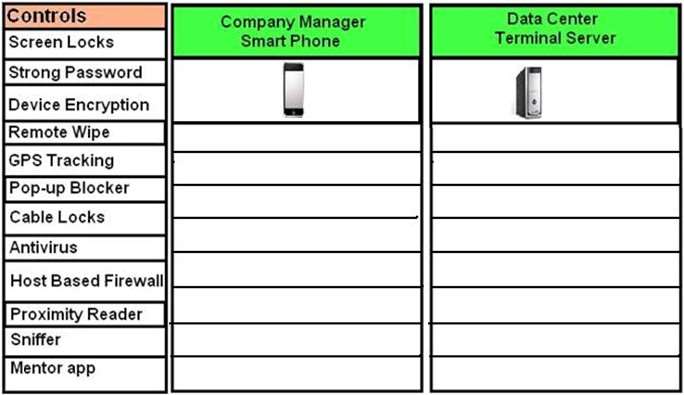 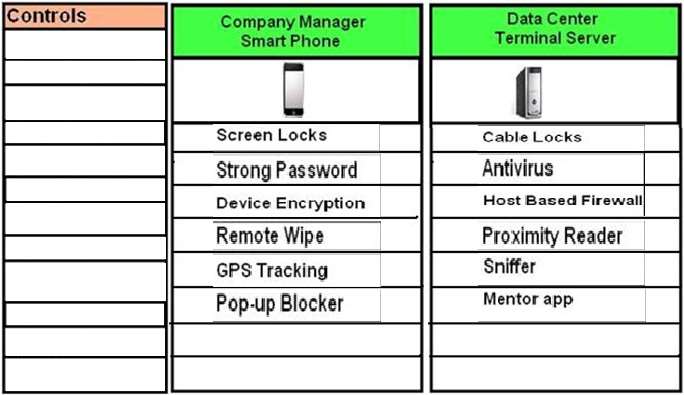 Explanation:
Cable locks are used as a hardware lock mechanism – thus best used on a Data Center Terminal Server.
Network monitors are also known as sniffers – thus best used on a Data Center Terminal Server.
Install antivirus software. Antivirus software should be installed and definitions kept current on all hosts.
Antivirus software should run on the server as well as on every workstation. In addition to active monitoring of
incoming files, scans should be conducted regularly to catch any infections that have slipped through- thus best
used on a Data Center Terminal Server.
Proximity readers are used as part of physical barriers which makes it more appropriate to use on a center’s
entrance to protect the terminal server.
Mentor app is an Apple application used for personal development and is best used on a mobile device such as
a smart phone.
Remote wipe is an application that can be used on devices that are stolen to keep data safe. It is basically a
command to a phone that will remotely clear the data on that phone. This process is known as a remote wipe,
and it is intended to be used if the phone is stolen or going to another user.
Should a device be stolen, GPS (Global Positioning System) tracking can be used to identify its location and
allow authorities to find it – thus best used on a smart phone.
Screen Lock is where the display should be configured to time out after a short period of inactivity and the
screen locked with a password. To be able to access the system again, the user must provide the password.
After a certain number of attempts, the user should not be allowed to attempt any additional logons; this is
called lockout – thus best used on a smart phone.
Strong Password since passwords are always important, but even more so when you consider that the device
could be stolen and in the possession of someone who has unlimited access and time to try various values –
thus best use strong passwords on a smartphone as it can be stolen more easily than a terminal server in a
data center.
Device Encryption- Data should be encrypted on the device so that if it does fall into the wrong hands, it cannot
be accessed in a usable form without the correct passwords. It is recommended to you use Trusted Platform
Module (TPM) for all mobile devices where possible.
Use pop-up blockers. Not only are pop-ups irritating, but they are also a security threat. Pop-ups (including popunders) represent unwanted programs running on the system, and they can jeopardize the system’s well-being.
This will be more effective on a mobile device rather than a terminal server.
Use host-based firewalls. A firewall is the first line of defense against attackers and malware. Almost every
current operating system includes a firewall, and most are turned on by Default- thus best used on a Data
Center Terminal Server.