30%
You are here: Home >  Briefing Amazon Knowledge > AWS-SAP (v.2) > you need to change anything in the architecture to main…

Your application is using an ELB in front of an Auto Scaling group of web/application servers deployed across
two AZs and a Multi-AZ RDS Instance for data persistence.
The database CPU is often above 80% usage and 90% of I/O operations on the database are reads. To
improve performance you recently added a single-node Memcached ElastiCache Cluster to cache frequent DB
query results. In the next weeks the overall workload is expected to grow by 30%.
Do you need to change anything in the architecture to maintain the high availability or the application with the
anticipated additional load? Why?

A.
Yes, you should deploy two Memcached ElastiCache Clusters in different AZs because the RDS instance
will not be able to handle the load if the cache node fails.

B.
No, if the cache node fails you can always get the same data from the DB without having any availability
impact.

C.
No, if the cache node fails the automated ElastiCache node recovery feature will prevent any availability
impact.

D.
Yes, you should deploy the Memcached ElastiCache Cluster with two nodes in the same AZ as the RDS DB
master instance to handle the load if one cache node fails.

Explanation:
ElastiCache for Memcached
The primary goal of caching is typically to offload reads from your database or other primary data source. In
most apps, you have hot spots of data that are regularly queried, but only updated periodically. Think of the
front page of a blog or news site, or the top 100 leaderboard in an online game. In this type of case, your app
can receive dozens, hundreds, or even thousands of requests for the same data before it’s updated again.
Having your caching layer handle these queries has several advantages. First, it’s considerably cheaper to add
an in-memory cache than to scale up to a larger database cluster. Second, an in-memory cache is also easier
to scale out, because it’s easier to distribute an in-memory cache horizontally than a relational database.
Last, a caching layer provides a request buffer in the event of a sudden spike in usage. If your app or game
ends up on the front page of Reddit or the App Store, it’s not unheard of to see a spike that is 10 to 100 timesyour normal application load. Even if you autoscale your application instances, a 10x request spike will likely
make your database very unhappy.
Let’s focus on ElastiCache for Memcached first, because it is the best fit for a cachingfocused solution. We’ll
revisit Redis later in the paper, and weigh its advantages and disadvantages.
Architecture with ElastiCache for Memcached
When you deploy an ElastiCache Memcached cluster, it sits in your application as a separate tier alongside
your database. As mentioned previously, Amazon ElastiCache does not directly communicate with your
database tier, or indeed have any particular knowledge of your database. A simplified deployment for a web
application looks something like this:

In this architecture diagram, the Amazon EC2 application instances are in an Auto Scaling group, located
behind a load balancer using Elastic Load Balancing, which distributes requests among the instances. As
requests come into a given EC2 instance, that EC2 instance is responsible for communicating with ElastiCache
and the database tier. For development purposes, you can begin with a single ElastiCache node to test your
application, and then scale to additional cluster nodes by modifying the ElastiCache cluster. As you add
additional cache nodes, the EC2 application instances are able to distribute cache keys across multiple
ElastiCache nodes. The most common practice is to use client-side sharding to distribute keys across cache
nodes, which we will discuss later in this paper. 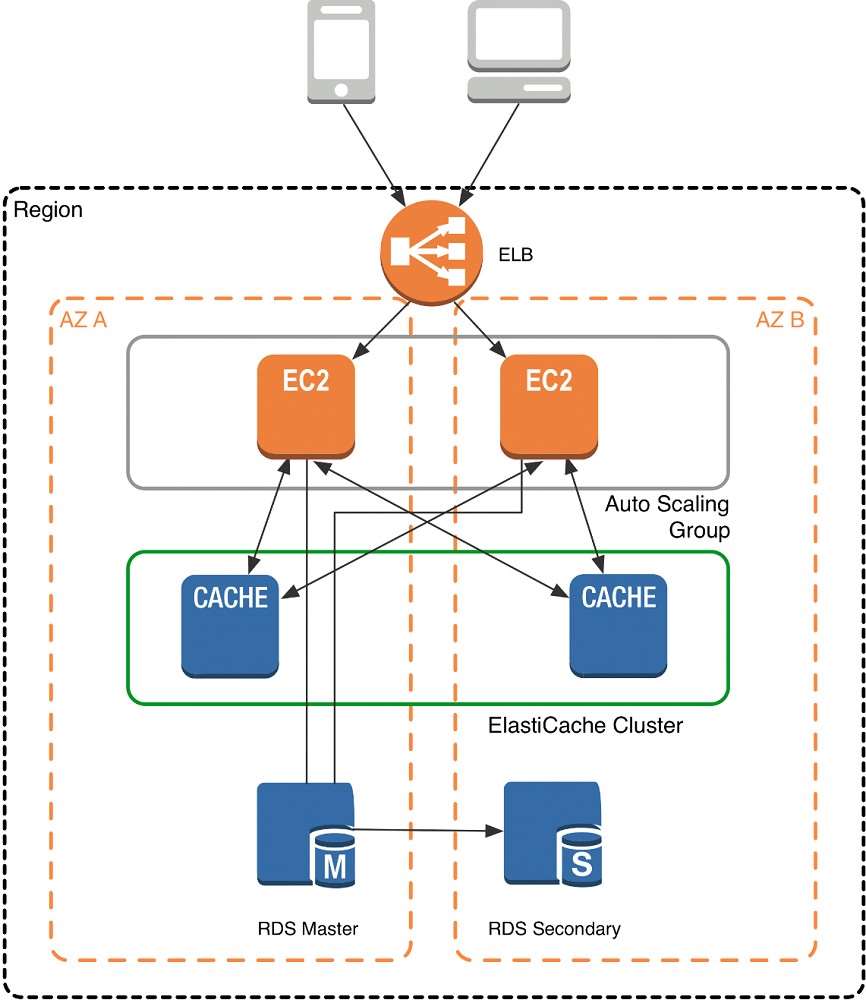 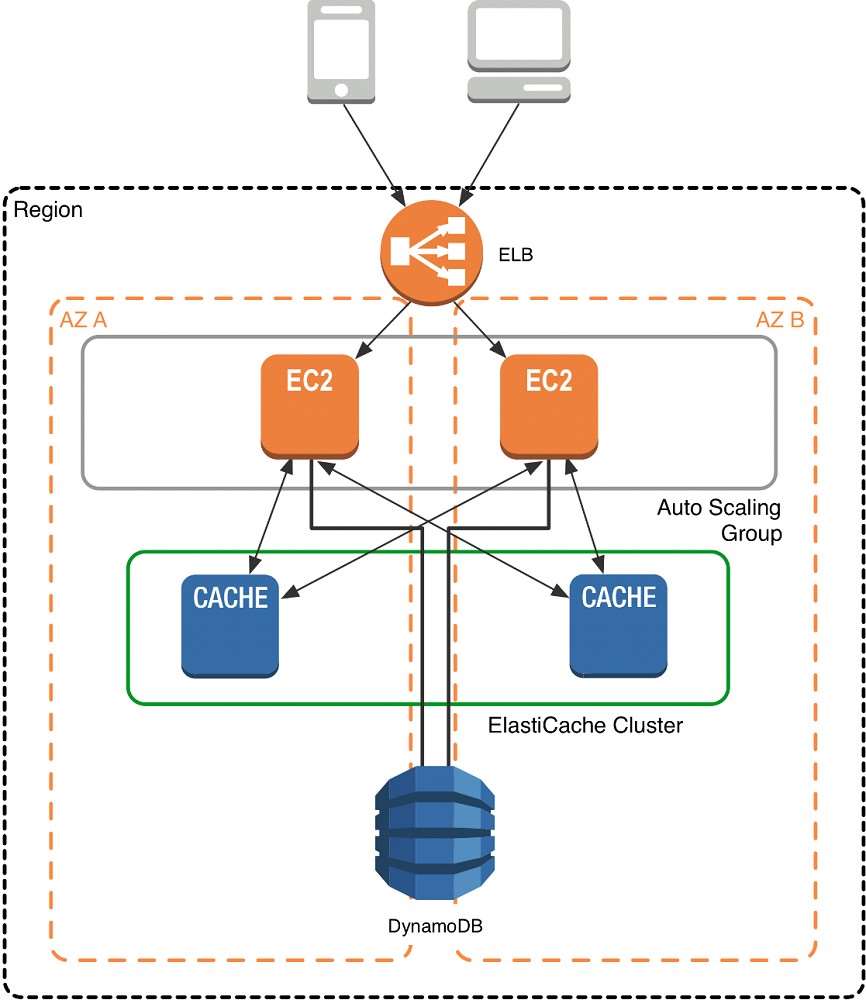 This combination of DynamoDB and ElastiCache is very popular with mobile and game companies, because
DynamoDB allows for higher write throughput at lower cost than traditional relational databases. In addition,
DynamoDB uses a key-value access pattern similar to ElastiCache, which also simplifies the programming
model. Instead of using relational SQL for the primary database but then key-value patterns for the cache, both
the primary database and cache can be programmed similarly. In this architecture pattern, DynamoDB remains
the source of truth for data, but application reads are offloaded to ElastiCache for a speed boost.